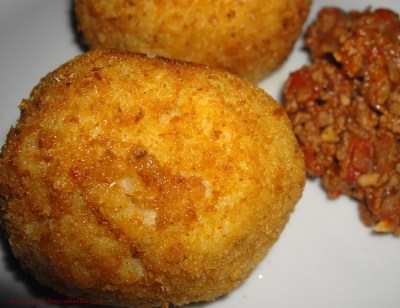 It is claimed that arancini originated in Sicily as far back as the 10th century. The balls of rice with various fillings are shaped, crumbed and fried, resembling an orange – the Italian for orange being arancia. (Rice cooked the day before and cooled in the fridge works best.) In Messina, they can be more cone shaped, while in Naples they are pall’e riso (rice balls) apparently. I think ours (made 11 centuries later in Australia!) ended up being influenced a little by both cities.