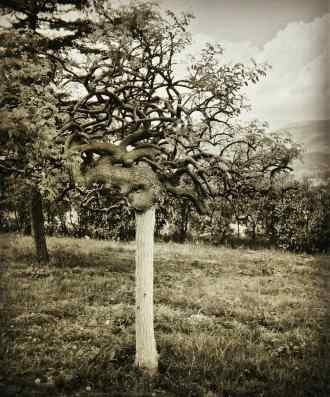 Came across this lovely tree when I was walking from the house in Fossa along the road to the village cemetery. It stands looking to the Aterno Valley and the Apennines in Abruzzo with Gran Sasso in the distance.

* Interestingly, the oldest (scientifically dated) tree in Europe is in southern Italy. A craggy pine (Pinus heldreichii) that is 1230 years old and called, Italus (and is still growing).

Received this lovely gift from a reader, Augusto (who doesn’t mind me sharing that he lives in Australia, was born in Fossa, Abruzzo and was pleased to discover the books). At 80, for the first time he’s learnt copper smithing and made me this little, copper conca and ladle, like those larger ones traditionally used in Abruzzo to collect water (women like my bisnonna Maddalena carried them on their heads).

Thank you to Augusto, such a beautiful kindness. I will treasure it always! And many thanks to all who’ve connected through messages and letters. It’s such a pleasure to hear from you. What most drives me to write is to preserve experiences of ‘everyday’ people and their often overlooked yet I believe significant parts of history. Thank you for your interest (and I’m working hard on the next book!!) xx

Looking out from Fossa to the Apennines and nearby towns…

When I think back to first leaning on these railings more than two decades ago, the unexpected sense of belonging to a place that until then I’d only heard about, amazes me even now. Such a beautiful landscape in all it holds, its timelessness, change, ancestry, scars, history and splendour. xx 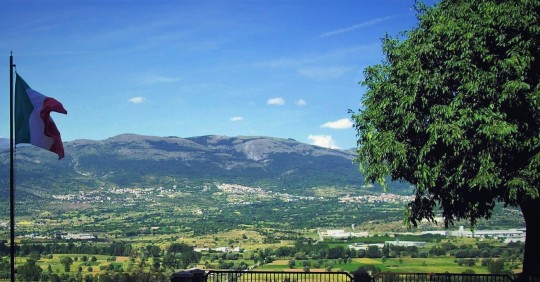 “Nonno Anni’s face creases in smiles when I join him. He leads me out to Piazza Belvedere and we lean on the railings taking in the magnificent view of the Aterno Valley. Nonno Anni straightens and takes a big breath. He slaps his chest, encouraging me to take some deep breaths of the pure mountain air with him.” 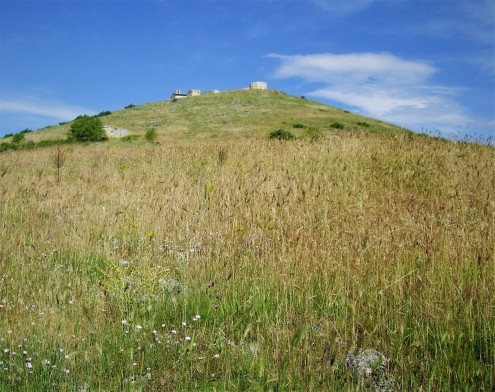 This hillside speckled with wildflowers could perhaps be out of Little House on the Prairie but is in Abruzzo (where, incidentally, many spaghetti westerns were filmed in the 1960s and 70s).

Took this photograph near the farmhouse where I stayed after the 2009 earthquake (as my family’s village of Fossa was evacuated). This was just outside the village of Sant’ Eusanio Forconese, population around 400, with the hilltop castle (pictured) of the same name.

At the time, I was too overwhelmed by the earthquake to take it in much but later found out this castle was built in the 12th century with walls around a metre thick, up to seven metres high and also a moat, enabling it to retain its defenses for nearly 600 years.

Such a quiet, tucked away spot, easy to rush past, yet as always, the landscape in Abruzzo’s Aterno Valley never ceases to amaze me in its history, varying beauty and terrain.

My grandfather, Annibale, on the eastern edge of Monte Circolo near Castle Ocre looking over the Aterno Valley (with Fossa just below) in 1975. It was the first time he was able to return to the village and was so happy to revisit all the places of where he’d grown up.

Exactly 30 years later, I took the other photo from almost the same spot. I didn’t know about this photograph of Nonno Anni at the time but I think one day I’ll have to attempt to replicate it by standing on the same rock. He was about 52 in that photo, perhaps when the time comes I should try getting the similar shot at the same age!

From over the Aterno Valley, Abruzzo… 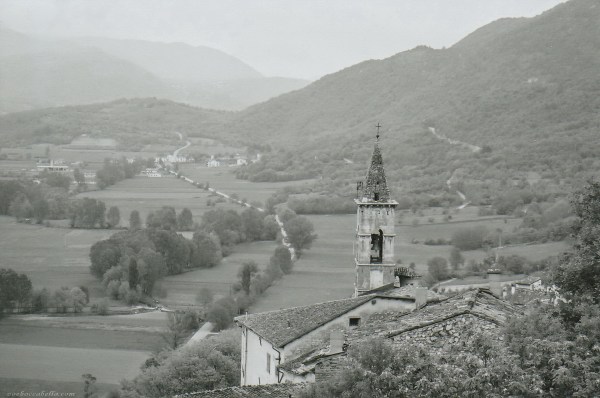 The steeple of Santa Maria Assunta in Fossa… the church that sits opposite my family’s house in Abruzzo. It was lovely to walk along the lanes below and listen to the bell tolling the time of day or to hear it from afar when you were on your way back to the village.

When I took this in 2005, it was a beautiful, serene day with no hint that just four years later the steeple’s turret would be gone when the earthquake caused it to crash down through the church roof.

Originally built in the 1200s, the church was expanded during the 1400s and then partly rebuilt following the earthquake of 1703. (At this time, my family’s house was about a decade old and had experienced its first terremoto.) I took this photograph with my old Pentax camera on black and white film. Although just over a decade ago, I didn’t yet have a digital camera then!