It’s been almost a decade since I headed to Millmerran and Western Creek with Roger to try and find the internment camp where ‘Joe’, Nonno Anni and many other Italian men were held in 1942. Back then, hardly anyone knew of the camp, either authorities or locals, and to find its location I was relying on my grandfather’s memories from decades before and scant information I’d been able to garner. For those who’ve read, Joe’s Fruit Shop and Milk Bar, you may recall I stopped at a spot out at Western Creek largely on a ‘feeling’. It seems absurd, I know, and hardly scientific. However, since then, more research and investigating has been done by others to locate the camp site and I can hardly believe it but the spot I had a feeling about ended up being the exact right location. So wonderful to discover this (and a bit spooky too perhaps!) 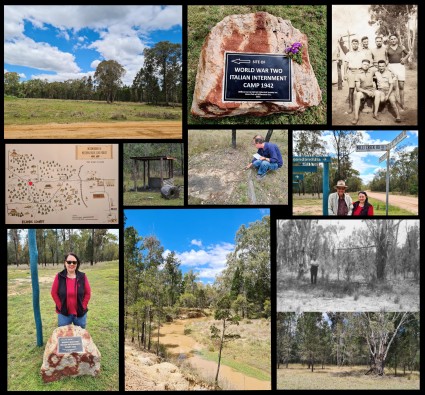 Clockwise from top left: Location of the internment camp Western Creek, the memorial stone, internees in 1942 (Nonno Anni standing on right), with Cec at the crossroads near the camp, Nonno Anni there in 1964 and the possible spot now, Western Creek, at the memorial stone, red dot marks the spot. And centre: Roger at the galley cook area find, and how it would’ve looked based on a similar one from the era still standing.

The second discovery we made was while walking around and deeper into the site, this time in search for where Nonno Anni had his photo taken when he returned there in 1964. I’m not convinced we found exactly where he stood, even though there was a stump where the other tree behind him had been, but nearby, we made a new discovery, the concrete slab where the crude, galley cooking area of corrugated iron had been. Again, by chance.

To return to this location, now confirmed, on the 80th anniversary that the internment camp was there, felt very special. I’d been invited to speak at an event for this back in May but it was cancelled due to rain and I felt sad in not being able to honour the internees that day. I’d vowed to still return to the site anyway when I could, just quietly, and I picked some nearby wildflowers (and weeds – but pretty!) and left them at the memorial stone that now marks the site.

It was lovely to share this moment with both Roger and also Cecil Gibson, born and of Millmerran and Western Creek for all of his 86 years. While others later became involved, for which I’m very thankful, Cec deserves special mention because he was the first local to pick up on this hidden history after reading about it in, Joe’s Fruit Shop and Milk Bar, and to contact me. He remained focussed on honouring the history both at the site and the Millmerran Museum, even when much seemed against him at times.

The first internment camps in Australia were established under the Menzies government in 1940 and most of these were full by the time the war really ramped up in 1942 and the ‘overflow’ of ‘enemy aliens’ were interned in unofficial and secret camps in isolated state forest and bushland. While other countries like Canada apologised to its Italian-Canadian WW2 internees in 2021 and the U.S.A. has introduced a Bill towards doing so, Australia remains silent on this. And sadly, most Italian-Australian internees are no longer able to receive an apology. That doesn’t mean it’s not important also for their descendants though and all those others who care deeply for their local history.

To write about this internment camp and what happened to Italian-Australians in the 20th century is the most important part of what I’m fortunate to do. And I don’t think the people of Millmerran were given enough credit with the camp being kept secret from them for so long. All of those I’ve spoken to from the area have had nothing but respect, acceptance and the will to help preserve this history and for that I’ll always be grateful. Zoë x

Thank you if you read until the very end! 😊 I just couldn’t skimp on this one. 💛 xx