From what seems impossible… 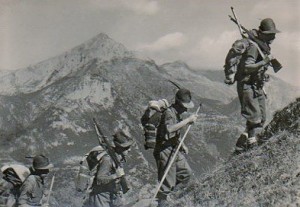 “La Spagnola” was what Great-Granny Maddalena called the Spanish influenza pandemic. When it reached Abruzzo, she was twenty-five and yet to marry, with a broken engagement behind her, and working in her parents’ butchery and grain mill in Poggio Picenze. She told my father that after the end of World War I, she remembers seeing young soldiers walking across the valley returning home to their mountain villages after years away fighting. (One of them, my Bisnonno Vitale, an Alpini soldier from Fossa, who hated war, she’d marry just a few years later.) Most of these young men were traumatised, many with missing limbs and no help from authorities for them to recover.

As they returned to their families and small villages, many unknowingly arrived carrying the Spanish flu with them, which tragically caused more loss after their homecomings. It’s no wonder Granny Maddalena didn’t want to talk about this time much. Her father, Emidio, died that same year in 1919 and I’m not certain if it was from la Spagnola, since many doctors put pneumonia or septicaemia on death certificates instead. However, as he was only 61 and his sister and brother aged 60 and 59 both died in 1918, it’s very possible they all succumbed to what was known as the Spanish flu. From 1918 to 1920, 500 million people across the world suffered from the pandemic with the death toll being at least 50 million, though some estimate it closer to 100 million.

There are stories across the world from this time of parents warning children to behave or “the Spanish lady will get you” and children’s rhymes that began, “I had a little bird, its name was Enza, I opened the window, and in-flu-enza…” Fortunately such fearsome ways are mostly relegated to history, however, in our present uncertain period, this Australian, 1919 drawing by May Gibbs to help children understand what was happening at the time shows perhaps a gentler way that is almost as relevant today. 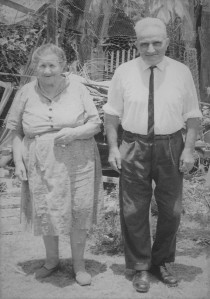 In what is set to continue to be a challenging time in coming months, I wish you forbearance, a little humour when needed, gentleness and care. For me, if there’s perhaps one thing to hold onto, judging by how people have overcome brutal times in the past including some in my own family, it’s that even when confronted by that which may seem almost impossible to face, it is possible to face it and be stronger than you thought you could be.