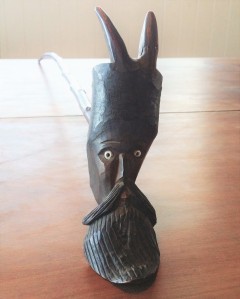 Not quite Halloween but this fellow can seem a bit scary. It’s a traditional, 19th century pipe – said to be hand-carved by a shepherd in Abruzzo’s mountains – that I found in an antique shop in Paris of all places. The pipe is close to a metre long and designed so its bowl sits on the ground. Such an unusual and rare piece from Abruzzo, I decided I couldn’t leave him in Paris so he’s had quite a journey over the past 140 years or so from Italy to France then Australia – ironically the same course my Bisnonno Vitale took before he arrived in Melbourne in the 1920s.

“Verses carved on staves by shepherds, with an infinity of patient ornamental detail, are strongly reminiscent of old Etruscan myths and beliefs long since forgotten, but which have left behind them curious customs and rites, the traditions of which still cling to the newer generations who do not seem able to break away from them.” 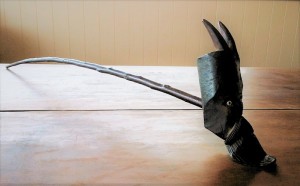