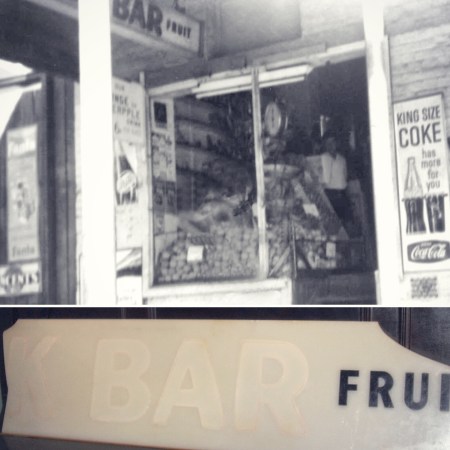 In this photograph of my family’s fruit shop and milk bar in its earlier days, it’s apparent how it began very modestly with my grandparents standing on the footpath in Ann Street selling produce from a ‘hole in the wall’ before they expanded the space to include a milk bar. Visible in the top left is some of the sign that hung over the footpath from around the early 1950s. It was white with ‘milk bar’ in red Perspex letters and lit up at night.

Below is the only part of the sign we managed to salvage after Brisbane’s 2011 floods (and happens to be the bit seen in this photograph taken almost 70 years ago!) It might be broken but it’s one of only a handful of items my grandparents kept when they closed their milk bar and with now no trace that it ever existed, it seems lucky to have this piece left.